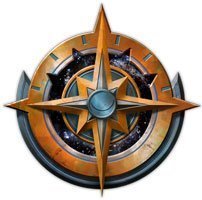 Sanctioned for play in the Starfinder Society campaign.

A desperate scam artist prowls the bars of Drifter’s End, fleecing the tourists and starship crews of Absalom Station out of their hard-earned credits with a chunk of fake horacalcum and the chance to invest in their newly discovered starmetal vein. It’s up to the PCs to track down this fake miner, and haul them back to pay their dues! – Released January 2022.

United Interfaith Engineering is a new shirren starship manufacturer with lofty ambitions. While they‚Äôve made a name for themselves selling mid-sized, well-defended starships for the galactic explorer, they aspire to sign a lucrative contract a major Pact Worlds organization in the near future. To that end, UIE hires the PCs to take their newly designed Grimshaw I for a test flight from Absalom Station to a Liavaran shepherd moon and back. Along the way, the PCs put the starship through its paces, avoiding dangerous hazards, performing difficult maneuvers, and dealing with Liavara‚’s massive wildlife.  – Released March 2022.

The Ring of Nations is a sprawling line of 27 nations encircling the planet Verces that‚’s home to some of the most advanced technology in the Pact Worlds. When an automated power plant in the newly developed but ever-expanding city of Thamal goes offline, casting swaths of the city in darkness, the government deploys repair and scouting drones to investigate. None have returned. Armed with a few aerial images of the power plant, now mysteriously overgrown with local flora, the PCs are dispatched to bring the power plant back online!

The Liavaran moon of Arkanen is a scientific anomaly that draws the attention of scientists and spellcasters from all over the Pact Worlds. While many of Arkanen’s corporations and researchers are interested in technological and magical methods of harnessing and utilizing the moon’s powerful storms, Akrikaus Research Laboratories is focused on preserving and studying Arkanen’s ecological diversity and the biological adaptations of the local flora and fauna, which enabled these life forms to thrive despite Arkanen’s atmospheric bleed and powerful orbital storms. After years of work, Akrikaus Labs has genetically re-engineered an extinct animal species and are scheduled to re-introduce the species into a nearby nature preserve. When opportunistic poachers steal these once-extinct creatures, Arkrikaus Labs hires the PCs to retrieve the valuable animals before they’re lost forever. – Released July 2022.