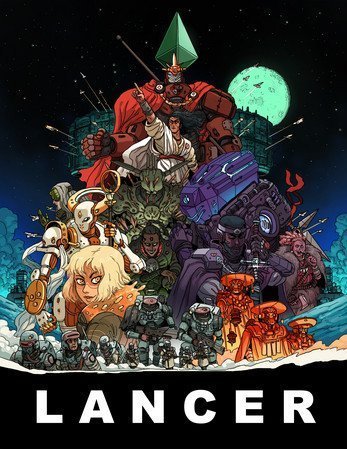 Nowhere to go but up, pilots.

Lancer imagines a future where the surviving humanity has spread to the stars after weathering terrible ecological collapse on Earth – the end of the Anthropocene as a consequence of unrestrained consumption and poor stewardship. Five thousand years later, humanity lives in the wake of a desperate revolution, one where the victorious radicals now manage the galaxy they’ve won.

In Lancer, players adopt the roles of mechanized chassis pilots – mech pilots – comrades together in a galaxy of danger and hope. Some groups will fight to rectify the crimes of previous administrations; others will fight for their nation, pieces in a greater game of hegemony. Others will carry the banner of a corpro-state or mercenary company, working to advance private interests while lining their pockets. Others still will fight for groups acting in opposition to those in power – for the underground, for the forgotten, agents of entropy, and agents of yet more radical revolutions.

This setting features a mix of gritty, mud-and-lasers military science fiction and mythic science fantasy, where conscript pilots mix ranks with flying aces, mercenary guns-for-hire brawl with secretive corpro-state agents, and relativistic paladins cross thermal lances with causality-breaking, unknowable beings. Lancer’s galaxy is one where utopia exists but is under threat, and the struggle is not yet entirely won; the revolution is not yet done.

Lancer offers deep, modular mech customization, a wide range of player backgrounds and hooks to prompt storytelling, and a system and setting with room for any narrative you and your group want to tell. It‚’s best with a group of 3-5 players, and can be used to run a one-shot session or persistent campaign.

Included with the free PDF of the Lancer Core Book are all the core rules, mechs, and character options – everything you need to learn LANCER and build a character. Not included is the NPC creation, GM section, and setting info – but everything in this version of the core book is otherwise the exact same (art and all) as the main book

Nowhere to go but up, pilots.