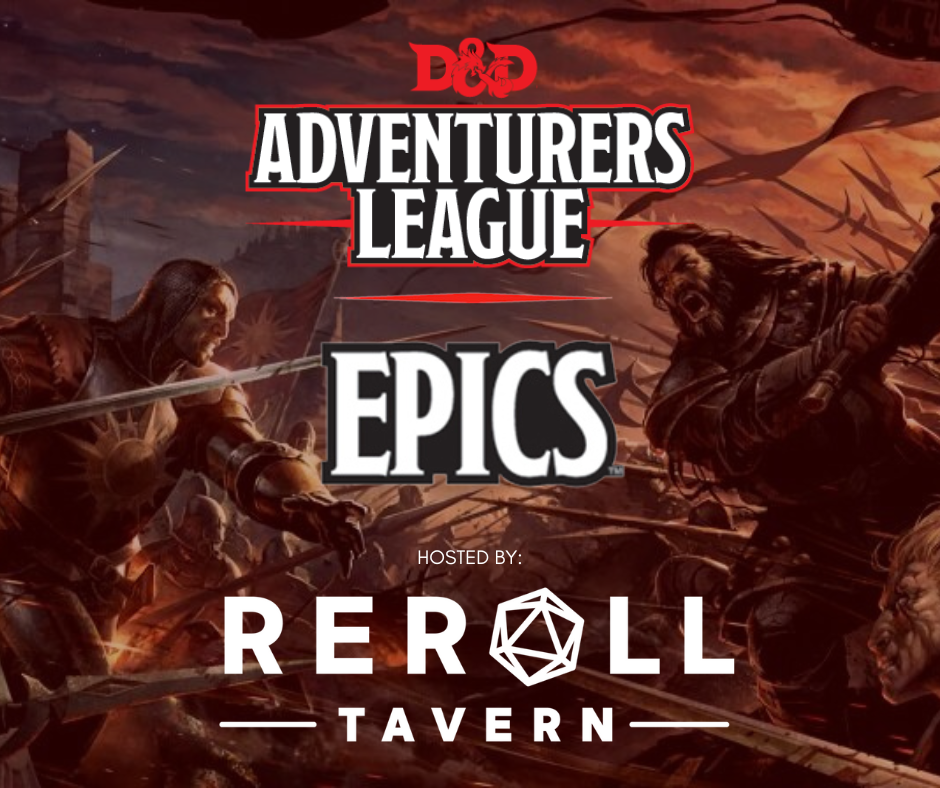 Join us Saturday, October 1st for an Epic Dungeons and Dragons Game at Meepleathon, sponsored by ReRoll Tavern!

“Khundrukar held many fine implements of war in its heyday, many of them now lost to time. Clues point to some of long dead Master Smith Durgeddin’s handiwork in the service of sinister forces that bid their time deep in the Underdark. Reclaim the riches of Khundrukar from the darkness if you dare.”

This play through is of the Epic D&D adventure “Relics of Khundrukar” and is open to any Adventurers League Characters from levels 1 through 10, encompassing six tables working in tandem to complete the quest objectives. This is also a Charity Epic Game, as detailed further below.

The Epic will be held at 7100 NW Prairie View Rd at Meepleathon in the convention floor’s game room and can accommodate up to 42 Players at once! We will provide dice, miniatures, maps, blank character sheets, pencils and anything else you might need, including pre-made characters of all levels ready to jump into the action! All we need is you!

Player sign-in begins at 1:00pm, with games starting firmly at 2:00pm. Since this is a timed event, players not seated by 2:00pm will not be able to participate in the Event. This will be a four hour game. Tickets for this event are available for Free so you can reserve your spot through Eventbrite.

There is no cost to participate, however players will need a badge to Meepleathon in order to enter the convention hall and join the Epic. Walk-in players without event tickets are welcome to play, with seating preference given to players who registered in advance and have a ticket. Any player who has not claimed their ticketed seat by 1:45pm is subject to having their seat given to a walk-in player.

This is a Charity Epic Game, as such you will have the opportunity to support the Hillcrest Young Adult Housing Program by playing in this Epic! Players are permitted to purchase ReRolls for their d20s during the event for a $1 donation. Further, a player may donate $20 to place their dice with the 20 facing up and count it as a Natural 20. 100% of the proceeds from ReRoll donations goes directly to the Hillcrest Young Adult Housing Program!

A charity ReRoll does not grant advantage and does not negate disadvantage (it’s just a ReRoll and we’re not creating new rules), but a player can ReRoll that d20 as long as they keep donating. Any player or spectator can purchase a ReRoll for any other player, so long as the d20 roll does not result in a negative experience, such as forcing a character to fail a saving throw, getting that character killed/rendered unconscious, and so on. Players can do this as many times as they desire on a player’s d20 roll. Dungeon Masters will not be allowed to purchase ReRolls for their NPCs.